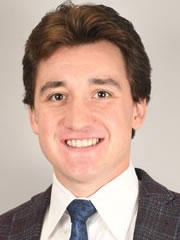 The award was established by the HCA in honor of former Army player Derek Hines, who was a “consummate team player and team builder.” Hines played at Army from 1999-2003 and was a four-year letter-winner as well as a co-captain his senior season. He was killed in the line of duty on Sept. 1, 2005 in Afghanistan.

Kosack, whose season was cancelled due to the Covid-19 pandemic, has excelled on and off the ice for four years in Schenectady. A finalist for the prestigious Hockey Humanitarian Award, he has combined hockey and volunteer work to help those around him.

Two years ago, a chance encounter with a teenage fan at an away game inspired Kosack to create “Kozi’s Kids,” an initiative that gives local Schenectady children a chance to experience a college hockey game – many for the first time.

Through the program, which utilizes unused game tickets and concession vouchers from Union players, Kosack arranges for transportation to a Union men’s hockey game, gives children a tour of the locker room before the game, and also answers questions from the children about life as a college student and a student-athlete. The nature of Kozi’s Kids changed dramatically this year due to the pandemic, but that did not stop Kosack from giving back to the community in different ways.

Without hockey games to bring local children to this season, he singlehandedly raised more than $5,000 to purchase Christmas presents for Schenectady children this holiday season. And in the same week that his team received word that its 2020-21 season was canceled, Josh delivered more than 100 coats to a local Schenectady charity as part of a drive he initiated on campus. Kosack is the first Union player and fourth player from the ECAC Hockey to win the award since its inception.

Said Union College head coach Rick Bennett, “I had the honor of getting to know Josh through his recruiting process in 2015. Since then, I have admired his dedication to become one of the finest student-athletes in our program’s history. During his four years at Union, Josh has excelled in academics and thrived in leadership on and off the ice. His selfless acts of community service are exemplary. Through his work ethic and humility in all he does, he has earned the respect of professors, athletic administration, coaches and peers.”

The HCA coordinates the award, with nominations from each of the six Division I men’s hockey conferences. The selection committee, made up of the six conference media contacts, Lt. Steve Hines, Derek’s father, and Army West Point head coach Brian Riley, vote on the winner “who displays exemplary sportsmanship, is supremely competitive, intelligent and extraordinarily conditioned with an unmatched work ethic.”